A former Cat Radio presenter has been nominated for prestigious radio award.

Bex Brighty studied Radio and TV Production at the University of Chester’s Warrington Campus, until she graduated in May.  The 24 year old has been nominated as part of the Student Radio Awards is up for ‘Best Entertainment Programme’ for her Cat Radio show, The Weekend Wind Down.  The Sunday night show included interviews – one with singer Frank Turner and a weekly feature with Bex’s ‘Nanna Brighty,’ who answered a range of questions.

The Student Radio Awards are supported by BBC Radio 1 and Global. They are hailed as the definitive celebration of student radio. Over the years student radio has launched the careers of Scott Mills, Greg James and Annie Mac.

More than 500 entries across 13 categories have been judged by more than 100 industry professionals this year.

The nominees in each category are whittled down to Bronze, Silver and Gold award winner. 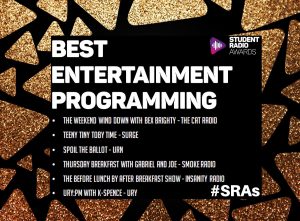 Bex said: “The Weekend Wind Down was a programme I really put my heart and soul into during my last year of University and it honestly means so much to me. This nomination is the cherry on top of the cake to the end of the best three years on The Cat Radio and at the University of Chester’s Warrington Campus. I’m so excited to graduate with my 2:1 degree and then head off to London a week later for the awards and to celebrate with my Cat Radio family.”

The star studded ceremony will be held at the indig02 arena in London on November 9, 2017.

Radio Production Programme Leader Michelle Ponting, said: “This is great news for Bex. She worked hard on this programme. It’s also great to have The Cat radio represented at the event again.”

For more information about the Radio Production course visit: https://www1.chester.ac.uk/study/undergraduate/radio-production-combined/201809