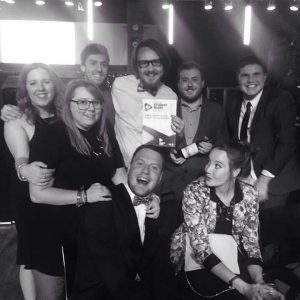 The Cat Radio has been awarded Silver at the Student Radio Awards!

The Silver award was awarded for ‘Best Student Radio Chart Show’.  Each year member stations are invited to produce a chart show that is broadcast on ALL student radio stations. Ours included an interview with The 1975 and we gave away tickets to a 5SOS gig. The show also included an tribute to Warrington band Viola Beach who died in a car crash in Sweden. The chart show was presented by Jarred Jones, Nicola McIntosh and Callum Ronan. Tommie Watts has been nominated in the ‘Best Male’ category.

The awards were held in London at the O2 on 1oth November and were sponsored by BBC Radio 1 and Global.

Congratulations to all of the presenters who took part and all the hard work that was put into winning this Silver award.