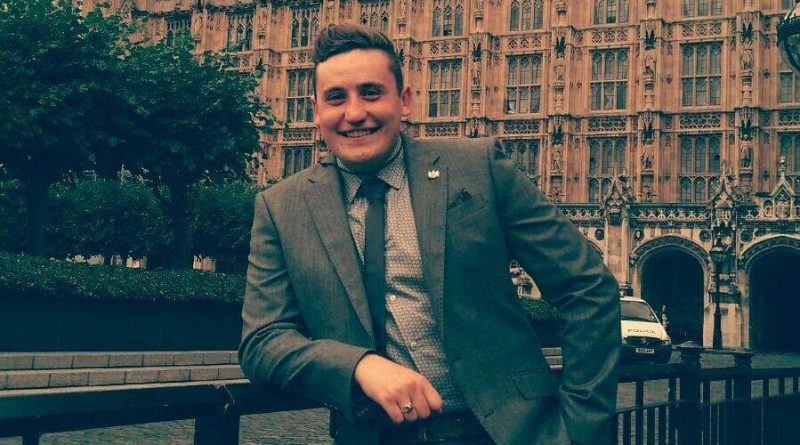 Edmund Prescott has been appointed as a Young Ambassador with the charity akt, which campaigns for safe homes and better futures for LGBTQ+ young people.

The 22-year-old, who is originally from New Brighton, Wirral, is about to go into his final year studying for a degree in Broadcast Production and Presenting at the University’s Warrington Campus. Edmund was inspired to support the charity after it helped him when he was growing up. After experiencing a difficult time in the care system, a youth worker recommended Edmund contact akt for support and guidance.

Edmund’s determination saw him teach himself to read and write at the age of 17, as he had not accessed academic education due to his abusive childhood. Living on £3 a week for food was tough and he even sold his own fridge to pay for his UCAS application to help create his future free from poverty.

As part of his new role, he recently met HRH The Duke of Cambridge at the opening of akt’s new centre in London. The next day he visited the designer brand Burberry’s headquarters in Westminster, to be interviewed as one of the first non-employees of the company to be featured in a podcast, which will be listened to by employers and employees.

He also recently visited the Speaker’s House at the House of Commons to celebrate the Trust’s 30th anniversary and speak to dignitaries about the cause, meeting with MPs, trustees and patrons. He renewed his acquaintance with Lord Norton, who had previously shown him round the House of Lord in 2016. After speaking in the State Rooms, Edmund said he was applauded for his speech and his comedy which was warmly received and enjoyed. Edmund has more engagements throughout the year.

He said: “Since taking this role on in January this year, I’ve had such an amazing experience, educating others about LGBTQ+ struggles, speaking to people and explaining about the work akt does. There is a large number of LGBTQ+ young people who are homeless. This is an issue that needs raising in society, the education system and government, as with education, comes knowledge and with knowledge comes empathy and empathy can empower action for tremendous change. I am deeply honoured to serve akt as a Young Ambassador.

“I met Prince William at the opening of the new akt Centre in London. He asked me about my role as a Young Ambassador and why I do it. I explained that I hoped that one day everybody will be able to walk down the street without suffering from abuse or oppression and that people will be free from labels and enabled to be the individuals they so rightly deserve to be. Prince William is an immensely warm and charismatic Prince, who I think will one day make a great King.

“I feel like I wouldn’t be here without akt. They gave me a mentor and a key worker when I needed their help and they do so much to help young people, and 78% of the Trust’s income is spent on the young people. Their work is immensely important and I want to help them achieve their aims to stop youth LGBTQ+ youth homelessness and protect the LGBTQ+ community.”

He added: “After my degree, I would love a career as a comedy presenter/comedy script writer, as I live for comedy and it flows through my very being. My hero is Sir Ken Dodd, who in my book is one of the greatest comedians that ever lived. I shared some laughs with Prince William and he said before departing: “Edmund, keep the jokes up.”

Following the podcast interview at Burberry in London, the group was astounded by Edmund’s story and the whole team applauded him for his strength and determination when he departed the building. He was asked at the end of the interview what he lived for and he said “to help people”.

He added: “I’m not living my life to be somebody, nor to follow the crowd, I’m living it to do something. Volunteering with akt is helping me to achieve that.”

Rebecca Hughes, the University’s Student Welfare Project Officer, said: “Edmund has overcome such a lot to get to University and is a real inspiration. It’s amazing to hear that Edmund is managing to fit all of this in alongside his studies and is so committed to helping others. I have no doubt that Edmund will continue to advocate for others both during and after his studies.”

Angela Graham, Services Manager at akt, said: “Everyone at akt is so incredibly proud of Edmund and his amazing achievements in spite of such hardships. He inspires everyone he meets with his wit and humour and it’s clear his determination and strength will help him to fulfil his goal of helping others.”