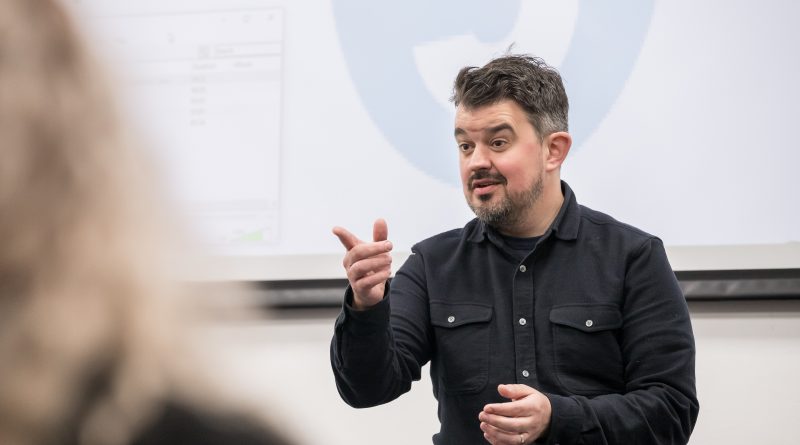 Aspiring radio presenters and podcast makers at the University of Chester have been learning from another industry expert.

As part of the regular Guest Sessions talks at the Warrington campus Chris Warburton spoke about his career and what it was like working in the industry.

The BBC 5 Live Presenter, BBC Sounds Podcast maker and One Show reporter also gave students advice about how to get noticed in the industry and how to progress.

Chris talked about his award winning podcast Beyond Reasonable Doubt. The story and the development of the production. Chris is the voice of the End of Days podcast which is about the Waco tragedy and those from Britain who joined the cult and were killed. He outlined how he got involved in the production, the research it involved, what it was like speaking to one of those convicted following the incident, the victim’s families and what it was like travelling to the site in Texas.  He also spoke about some of the stories he’s broken live on air as a presenter and how to tackle sensitive interviews. The broadcaster also gave an insight into his new role in TV.

Aside from students, staff also attended the session. Mark Duffet, Reader, said “Chris Warburton is an award-winning, seasoned broadcaster and it was a treat having someone of his calibre to speak to students. As well as providing some fascinating insights into the worlds of radio and podcasting, he offered some very valuable careers advice to students. I hope we can have him back in future”.

Michelle Ponting, Programme Leader for Radio Production, said: “The aim of these sessions is to bring the students learning to life. It’s great for them to learn from those working in the industry. To help them make contacts. I am really grateful that Chris took time out of his busy schedule to attend the session. I could have quizzed him all afternoon!”​