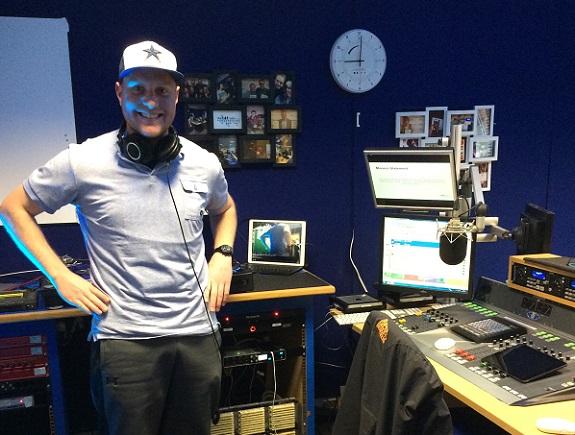 University of Chester’s Radio Production student Tommie Watts wanted to set himself the challenge of a marathon 24-hour show on The Cat Radio – the Warrington Campus’s radio station – as well as raise funds for a local charity.

The money raised – £318.85 – will go to the Warrington, Halton and St Helens Branch of the RSPCA, which relies totally on donations from the public, fundraising events and legacies.

Tommie, 27, from Nantwich, worked with the staff at the Centre to produce a number of interviews and radio packages about the animals needing care or new homes.

The show started at 4pm on Tuesday, February 28 and finished on 4pm Wednesday, March 1.

Tommie was joined by DJ Rasp on Tuesday evening to perform a special set. On Wednesday he was joined by other students, who were hosting their own shows as part of the usual schedule.

Tommie said: “I felt inspired to embark on an extra challenge to help promote The Cat Radio, on the Warrington Campus. A cat lover myself, I thought it only appropriate to also raise money for the RSPCA.

“I would like to personally thank Michelle Ponting, Programme Leader in Radio Production, and The Cat Radio management team, which has been extremely supportive.”

Michelle added: “Tommie is a great presenter and he did a fantastic job. He did really well over the 24-hours and the content he arranged with the RSPCA was brilliant. It was a great event and we’re really proud of him.”

Fellow student and one of the station’s Managers this year Rebekha Brighty, 23, from Cambridge, said: “We’ve had the idea as a management team to do a 24-hour show for charity for a couple of months now and Tommie has taken it on with both hands and smashed it.

“We’re very proud of our presenter, co-worker and friend. He has raised lots of money for a very deserving charity and we will definitely be considering another 24- hour show in the near future.”

Following the event, the RSPCA tweeted: “WOW! A fantastic achievement. Thank you very much.”

To find out more about The Cat Radio visit: http://thecatradio.co.uk